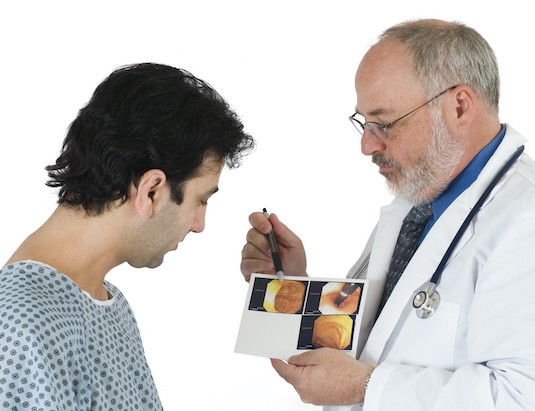 45 is the new 50! When it comes to colonoscopies, there’s recently been a significant change that you’ll want to make yourself aware of immediately.

Prompted by a recent alarming rise in cases of colorectal cancer in people younger than 50, an independent expert panel has recommended that individuals of average risk for the disease begin screening exams at 45 years of age instead of the traditional 50.

Thanks to the U.S. Preventive Services Task Force issuing this new guideline, many health insurance companies are now allowed to cover the cost of testing at a younger age, including preventive procedures such as colonoscopies and stool tests designed to detect colon cancer in its early stages.

All of which brings us back to the most fundamental question:

What is a Colonoscopy?

A colonoscopy is a procedure that allows your doctor to see the entire length of your large intestine and rectum. It is the “gold standard” of colorectal exams because it is the most accurate colon cancer test. It not only detects abnormalities but can eliminate them before they become malignant. This makes a colonoscopy a great part of a preventative health regime.

What is a Colonoscopy Used for?

A colonoscopy is a procedure used to detect and treat ulcers, polyps, or cancers in the large intestine (colon) and rectum. It is also used to investigate the cause of:

With regular screening, colonoscopies can proactively keep many conditions from even starting.

What is the Colon?

The colon, also called the large intestine or large bowel, is a five-foot-long tubular organ in your abdomen that helps digest food, absorb water, extract electrolytes and nutrients, and process food residue for excretion as a bowel movement. The process of transporting food through the intestines and out as a bowel movement takes 24 to 72 hours.

The large intestine also contains 100 trillion “good” bacteria essential in the digestive process. These bacteria have many functions, including:

Why Should I Get a Colonoscopy?

Of all the colorectal exams available, a colonoscopy is best at detecting and removing growths or lesions before they become dangerous. Many other types of screenings only detect an abnormality after it has begun bleeding or exhibiting signs of a more advanced condition.

This procedure can provide an accurate diagnosis without resorting to an operation. This is why a colonoscopy is the best choice for maintaining colon health. 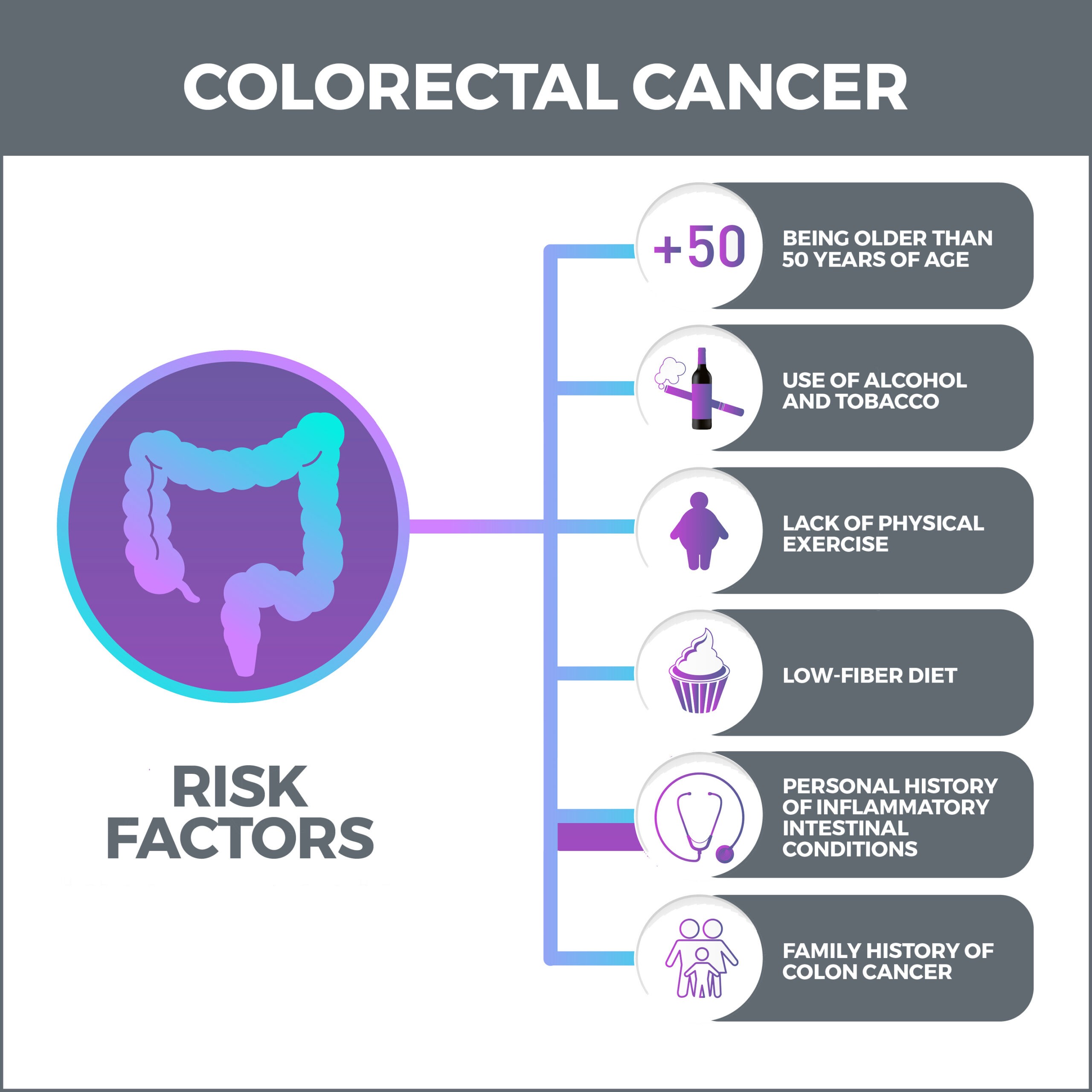 How Do I Prepare for a Colonoscopy?

To prepare for a colonoscopy, you’ll need to do a bowel prep before the procedure, which removes all traces of feces from your colon. A bowel prep typically includes medication changes or adjustments. Your doctor may adjust your medications up to seven days before your colonoscopy. Topping the list are blood thinners, including:

During your bowel prep, you’ll need to refrain from eating certain high-fiber foods, including:

Your doctor will put you on a clear liquid diet a day before the colonoscopy. A clear liquid is one you can read a magazine through. These include:

One of the most important parts of bowel prep is clearing all traces of waste from your colon. This is so your doctor has an unobstructed view of your intestine and can clearly see any abnormalities. You’ll be asked to take a laxative or an enema to flush out all fecal matter. Because of this, you will have diarrhea until your colon is completely evacuated.

How is a Colonoscopy Done?

A colonoscopy is an outpatient procedure that takes about 30 to 60 minutes.

You will be asked to change into a hospital gown when you arrive. You will lie down on an examination table, and intravenous sedation will be administered. You will not be aware of what is happening during the colonoscopy or remember anything afterward.

After the anesthesia takes effect, your doctor will insert a colonoscope into your anus and guide it through your intestine. A colonoscope is a flexible tube equipped with a light and a camera. It is about five feet long (the length of your colon) and half an inch wide. Air is also introduced to inflate the colon, making its walls more visible.

The colonoscope’s camera relays images to a monitor so your doctor can look at a detailed, real-time view of your intestine. The scope also has an attachment that can remove polyps or questionable-looking tissue for lab analysis. 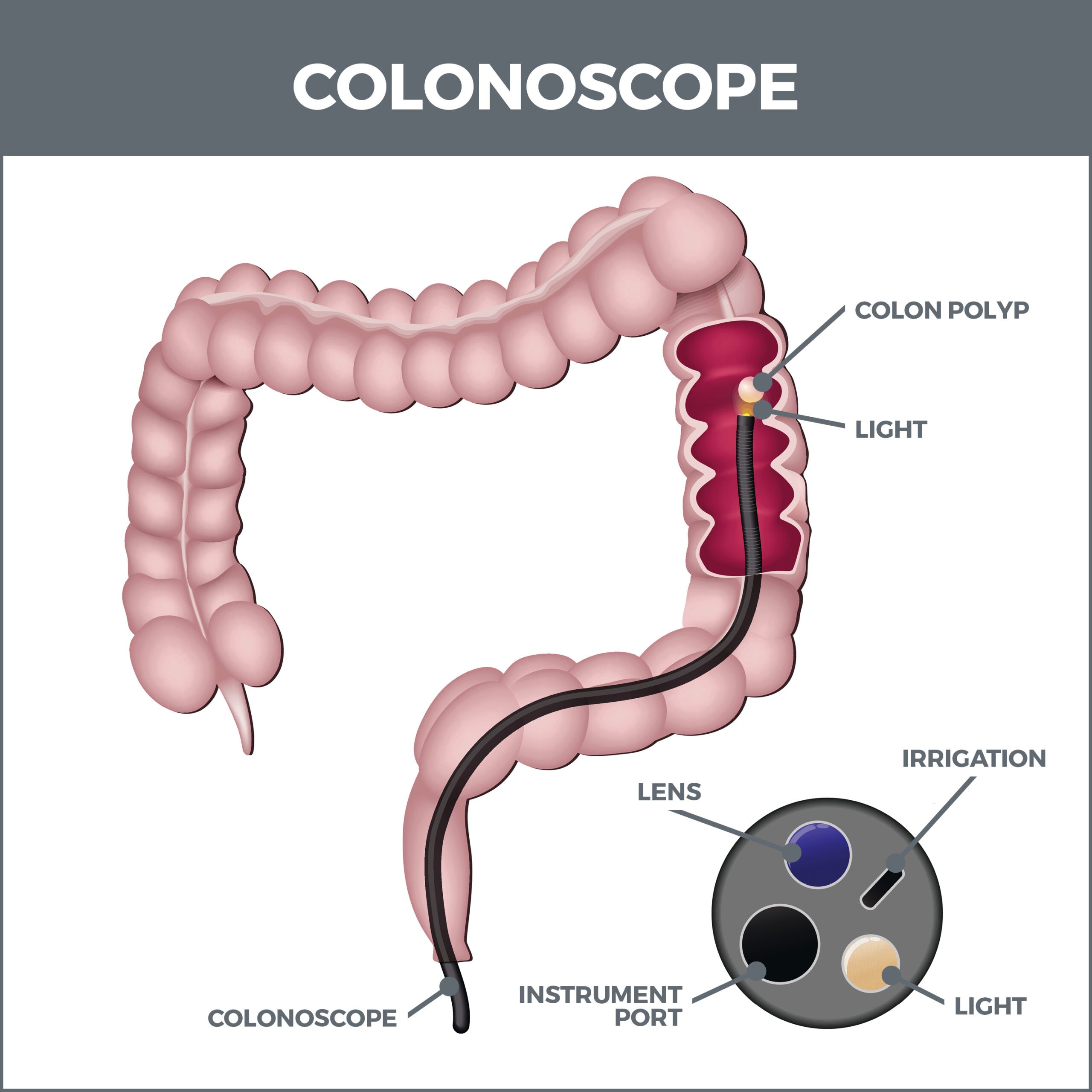 What Happens After the Colonoscopy?

After the colonoscopy, you’ll stay under observation for one or two hours to make sure you’re okay. You’ll feel groggy and sluggish. You won’t be able to drive, so you’ll need someone to take you home. This must be someone you know rather than an Uber or taxi driver. You shouldn’t drive for about 24 hours after the procedure.

Some rectal bleeding is normal if you have had a polyp removed and shouldn’t cause concern.

You may feel bloated or cramped afterward as air is released from your colon. Walking may help pass the gas. Don’t be embarrassed. The staff knows this is a normal part of the process.

How Long Will It Be Until My Next Bowel Movement?

Since your colon is completely empty, it may take several days for your body to produce bowel movements. You may have a bowel movement sooner if you eat plenty of roughage, such as whole grains, fruits, and vegetables.

Can I Resume My Regular Diet After a Colonoscopy?

The bowel prep you did is very dehydrating. You’ll need to replace the electrolytes and liquids that you lost. Since the colon’s lining may be irritated, your doctor may recommend that you drink generous amounts of fluids and eat soft, mild foods for the first day or two.

Foods you can eat after the procedure include:

Liquids you can have after a colonoscopy include:

After the procedure, avoid spicy foods and anything else that could aggravate your bowels. These foods can also exacerbate any nausea you may feel from the anesthesia.

Foods that you should steer clear of after the procedure include:

Liquids to avoid after a colonoscopy include:

When Should I Start Getting Colonoscopies?

It can’t be said enough – 45 is the new 50. The American Cancer Society now recommends colonoscopies every 10 years starting at age 45 if you don’t have any risk factors. Risk factors include:

Once you start regular screenings, you can typically follow the 10-year schedule until age 75. Then you can have screenings at your discretion, stopping at age 85. Your doctor will advise a schedule for you.

A colonoscopy is something that, under no conditions, shouldn’t be put off. Colonoscopies not only detect the disease but prevent cancer because precancerous polyps can be removed during the procedure. Thorough and accurate, it’s an unrivaled type of colorectal screening. If you’re 45 or older and have never had a colonoscopy, our experts will discuss it with you in-depth and dispel any concerns you may have about the procedure.

Contact us today! The team of professionals at GastroMD looks forward to working with you. We are one of the leading gastroenterology practices in Tampa Bay. We perform a host of diagnostic procedures using state-of-the-art equipment in a friendly, comfortable, and inviting atmosphere where patient care is always a top priority!