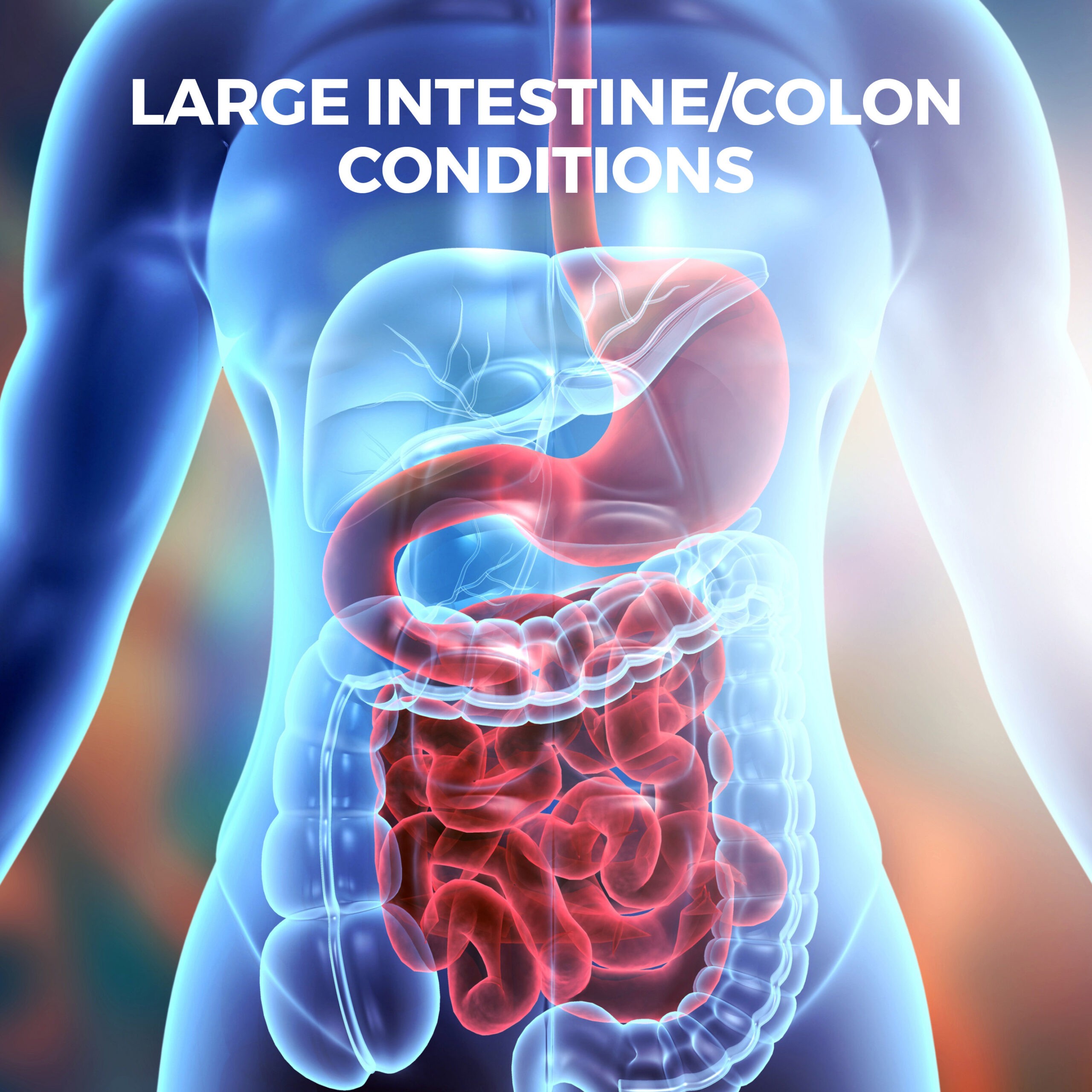 The large intestine, also known as the colon or large bowel, plays an important role in making and absorbing vitamins, absorbing electrolytes and water, and forming and transporting stool toward the rectum so that it can be expelled. When the large intestine is operating properly, this process smoothly takes place over the course of 24 to 30 hours.

Illnesses and injuries can disrupt this activity and impede digestion. There are many conditions that can cause the colon to malfunction.

Intestinal obstruction occurs when a blockage prevents feces or gas from leaving your body. It may partially or entirely clog the bowel and even rupture it, triggering dangerous inflammation. Blockage can happen anywhere in the intestine and often requires surgery.

The most common causes are:

IBS (not to be confused with IBD or inflammatory bowel disease) refers to a cluster of intestinal symptoms that occur together and need long-term management. These include:

Although it can be extremely uncomfortable, IBS doesn’t harm your intestines. It can be managed by getting plenty of exercise, avoiding trigger foods, eating a high fiber diet, taking fiber supplements, and over-the-counter and prescription medication.

Diverticulitis is the presence of one or more diverticula, which are abnormal pockets and bulges that form on your large intestine’s lining. They can be likened to bubbles that develop when you overfill a bicycle’s tire with too much air. The resulting pressure creates a bubble at the tire’s weakest point.

About 75 percent of diverticulitis cases are non-threatening. If these pouches become inflamed or infected, complications may arise, including: 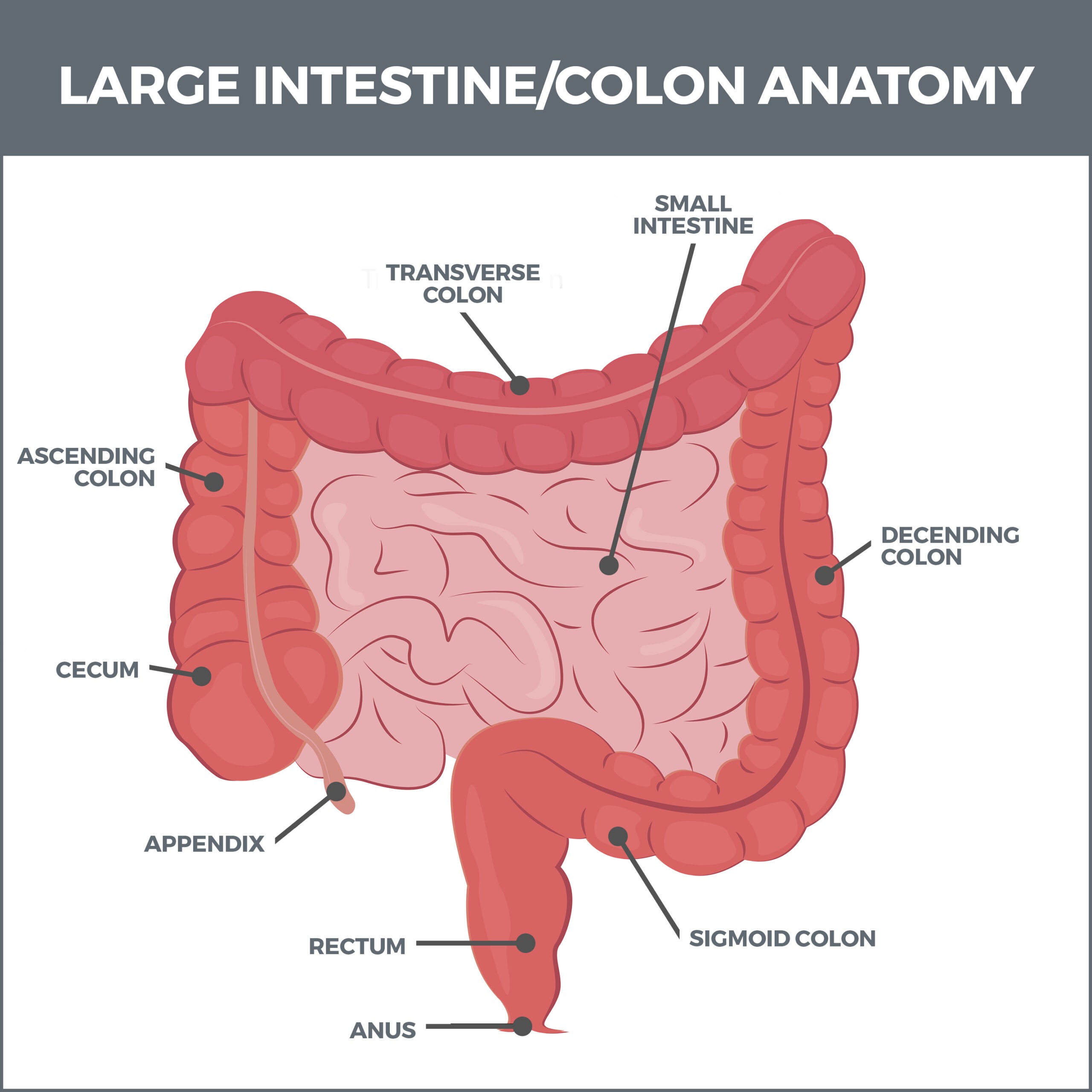 Intestinal perforation is a life-threatening condition in which a hole extends entirely through the large intestine, small intestine, or stomach. It can be caused by disorders including diverticulitis or appendicitis, or extreme trauma such as a gunshot or knife injury.

It is critical to seek medical treatment immediately. Otherwise, the condition can devolve into blood poisoning or sepsis (a dangerous condition in which your immune system has an extreme response to an infection and attacks your own body).

Ulcerative colitis is a chronic, inflammatory condition of the large intestine. It causes ulcers to form on the colon’s lining. These ulcers discharge pus, which induces cramps and the urge to go to the bathroom repeatedly.

This condition results when your immune system mistakes your body for an enemy. When your immune system is functioning correctly, it wards off intruders such as colds. When you have ulcerative colitis, your body mistakes food and healthy gut bacteria as invaders. This causes white blood cells, which normally protect you, to attack your intestine’s lining, creating ulcers and inflammation. In short, your body is attacking your colon.

Four types of UC are classified depending upon their location:

Celiac disease is an autoimmune condition in which your immune system launches an attack on your colon when you eat gluten (a substance found in foods such as wheat, rye, and barley). When this happens, hair-like objects on the intestine’s wall called villi are damaged. They absorb nutrients from the intestine, and without them, you can become malnourished.

Symptoms of celiac disease include:

Diarrhea is a very common condition, which causes frequent, loose, watery bowel movements. Besides an urgent need to go to the bathroom, it can cause bloating and cramps. Diarrhea is often caused by viruses, bacteria, and parasites, as well as food sensitivities, antibiotics, and anxiety. Most cases of diarrhea last a few days and resolve on their own. Diarrhea that lasts for weeks could signify a more serious condition.

Although diarrhea can be an uncomfortable inconvenience, it can become dangerous if you have these symptoms:

When you have constipation, it’s difficult to defecate. Constipation is characterized by fewer than three bowel movements in a week. You have to strain while trying to go to the bathroom, which only produces small, tough stools.

Luckily, constipation is easy to treat by doing any of the following:

Hirschprung’s disease is a rare congenital disability that occurs once in every 5,000 births. Severe cases are usually diagnosed during the first 45 hours after birth, although milder ones may be identified later in a child’s life. Hirschsprung’s disease is caused by a lack of nerve cells in an infant’s bowel.

It usually only affects the bottom segment of the intestine, although occasionally, it affects the entire colon and even part of the small intestine. Without nerve cells, the bowel’s muscles cannot move waste through the colon. Weak muscles can cause severe constipation, feces backing up in the colon, and partial or complete blockage. This disorder can morph into serious conditions like intestinal inflammation or a potentially fatal hole in the intestine’s wall.

Surgery is usually conducted to remove or bypass the affected section of the colon.

Crohn’s is a condition that causes your body’s immune system to attack the digestive tract’s lining. This causes ulcers and inflammation in several or all segments of the colon. Not only is it painful, but it can be debilitating, unpredictable, and life-threatening. There may be times when the symptoms manifest and times when they are in remission.

Symptoms of Crohn’s disease include:

There is no known cure for Crohn’s disease, but treatments are available that can reduce the inflammation-causing your symptoms. These include:

If your Crohn’s disease is unresponsive to these treatments, you may need surgery. During the operation, your surgeon eliminates the impaired part of your intestines and reconnects the undamaged parts. Unfortunately, the results of surgery are often temporary. Approximately two-thirds to three-quarters of those with Crohn’s disease will need at least one surgery, and the new damage frequently recurs near the reconnection point.

Appendicitis is an inflammation of the appendix – a small, worm-like tube at the end of your colon. Although its function is unknown, some theorize that it may aid in recovery from inflammation, diarrhea, and infections of the large and small intestine. Others believe it is a repository for good gut bacteria (microorganisms that ward off dangerous bacteria). Whatever the case may be, its absence has no adverse effect upon people who have had it removed. You can live normally without an appendix.

When the appendix becomes infected and inflamed, it is in danger of rupturing and releasing bacteria into your abdominal cavity. The only treatment is emergency removal of the organ.

The large colon is subject to many disorders. Many of these conditions share similar symptoms. The skilled professionals at Gastro MD are well-versed in recognizing and differentiating the signs and symptoms of a wide range of bowel problems.

Call us today! The team of professionals at GastroMD looks forward to working with you. We are one of the leading gastroenterology practices in the Tampa Bay area. We perform a host of diagnostic procedures using state-of-the-art equipment in a friendly, comfortable, and inviting atmosphere where patient care is always a top priority!