The gallbladder is a lemon-sized sac tucked under your liver. It stores bile secreted by the liver, which then flows into the small intestine for fat digestion. If something slows down the stream of bile or blocks it, your health can be jeopardized.

The following are gallbladder conditions that need medical attention, along with their symptoms and treatment options. 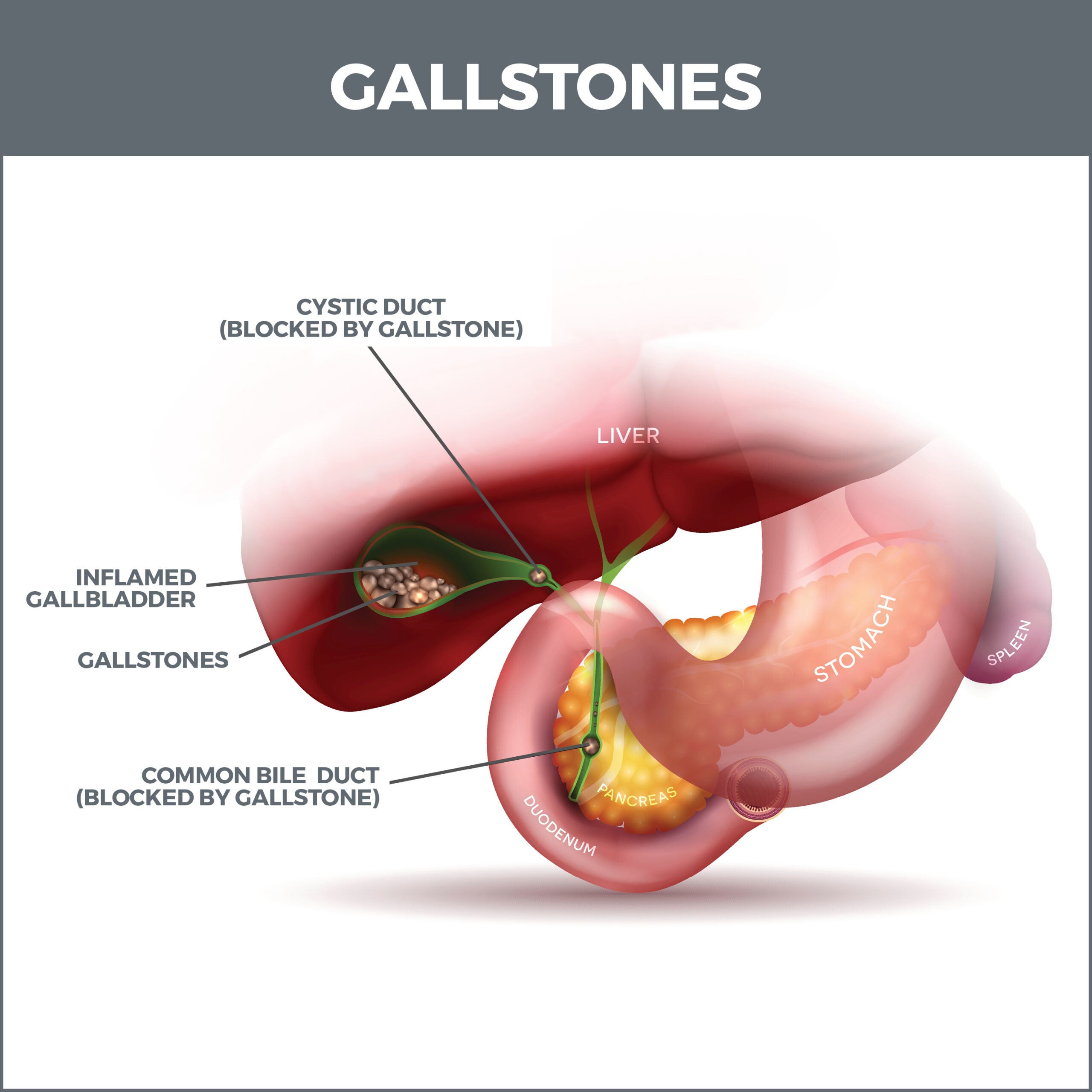 Gallstones are solid chunks of cholesterol and bilirubin (a bile salt) that form in the gallbladder. They can be of various sizes, from a single, large stone to hundreds of small ones. Small stones are the most harmful because they can get lodged in the bile duct.

Large gallstones tend to stay put. As a result, they’re nicknamed “silent gallstones” because they cause no discomfort and are often detected only when an imaging procedure is done for an unrelated health issue.

When a bile duct is blocked it can cause an attack characterized by:

There are many treatments for gallstones:

Acute cholecystitis happens suddenly and triggers intense, steady upper abdominal pain. Several of these attacks can make the gallbladder shrink and become unable to keep and release bile. As a result, it can lead to chronic cholecystitis, a condition that continues over time.

The symptoms of acute cholecystitis include:

There are various options for treating acute cholecystitis:

Chronic cholecystitis is an inflammation and swelling of the gallbladder. Attacks of acute cholecystitis cause this. Most of these attacks are generated by gallstones which block the bile duct and cause bile to back up into the organ. The condition is called chronic because repeat attacks are likely to happen over time.

As these attacks continue, the gallbladder walls thicken and scar while the organ shrinks. This makes it more and more difficult for the gallbladder to store and release bile.

The symptoms of cholecystitis include:

Hospitalization is necessary while treating gallbladder conditions such as acute cholecystitis, and this medical care includes:

Although symptoms usually resolve in several days, they often recur. Most people who suffer from chronic cholecystitis will eventually need to have their gallbladder removed.

Biliary colic occurs when one or more gallstones block the gallbladder’s common bile duct or its cystic duct. As a result, the ducts strenuously contract (spasm) to dislodge the stone, resulting in severe pain. These episodes typically occur for one or two hours and may not recur for years.

Biliary colic is usually triggered by the consumption of a large, fatty meal.

Usually, the only symptom is sudden pain that radiates from the upper abdomen to the right shoulder or back. The worst pain happens about an hour after the initial symptoms. The pain generally resolves after approximately one to five hours.

Surgery is usually necessary for relief from biliary colic by removing the gallbladder. This can be done one of two ways:

Acalculous gallbladder disease usually happens to people who have other afflictions, primarily sepsis, a severe infection of the entire body. It can also affect those who are experiencing:

The symptoms of this conditions include:

Hospitalization is necessary to control the inflammation caused by acalculous gallbladder conditions, and treatments include:

Choledocholithiasis refers to gallstones that form in the common bile duct rather than in the gallbladder. A stone trapped in the bile duct can infect the bile. When this happens, bacteria may spread to the liver and cause a deadly infection.

What are some of the symptoms of choledocholithiasis?

This procedure involves surgically cutting the common bile duct muscle to help stones travel through or be removed.

The gallbladder can seem to be a mysterious organ. Its form and function may be less familiar to you than your kidneys or intestines. Because of this, flare-ups can be frightening and confusing.